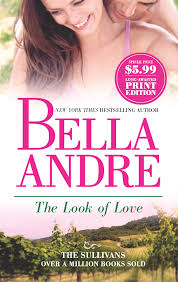 I received The Look of Love and several other of the Harlequin editions of the Bella Andre’s Sullivans books as part of a haul of books from a friend who was moving recently. And despite not knowing much about Bella Andre, I was intrigued, especially since the setup sounded a bit like a contemporary equivalent to Julia Quinn’s Bridgertons, at least in the sense of the broad setup.

And as a whole, this is a delightful start to the series, introducing or at least mentioning all of the family members, while also not taking away the spotlight from the couple of this book, Chase and Chloe, who are such well-written, compelling characters. I should warn some people that there are some moments that may feel a bit info-dump-y, sorting out who each sibling is, how old they are, and what each of them does for a living, but I quite liked this, as with such a large family, I knew I would need to make a “cheat sheet” of sorts to keep everyone straight.

While Bella Andre definitely writes alpha heroes, she writes the sort that are more protective rather than overbearing, which suits the dynamic here to a tee. Almost from page one, Chase was endearing to me, with the care he showed toward Chloe and the amount of love he clearly expressed toward his family. While he doesn’t categorize himself as a saint, and he (like all his brothers) definitely has a playboy past which comes into play in subtle ways in this one, I liked that he felt like a normal person that I would like to spend time with in real life, thus making it easier to fall in love with him as Chloe did (and him being more forward with his feelings when she was unsure doesn’t hurt either!)

Chloe is also a great character, and I love how Andre delved into the nuances of what it feels like to have been in an abusive relationship in a believable way. While her reluctance to fully commit may be an issue for some, I found it worked within the context of her situation.

This is a great introductory book by an author I’m so excited to have discovered, and I will definitely be reading more from her in the near future. I recommend this to others who love a great family-oriented romance series.