The Lady’s Guide to Petticoats and Piracy is another winner from Mackenzi Lee. While I admit I prefer the first book, it has a lot to do with the charm of Monty as a narrator. However, that doesn’t mean there isn’t a lot to love about Felicity and her journey. While it’s been done before in other books, and with perhaps a greater punch, I liked reading about a heroine who was so determined to break barriers and become a doctor in the face of patriarchal objection. And I love the fact that Felicity defining her identity is a major part of her growth, especially with the hints that she’s asexual, without being able to fully articulate that, due to the fact that it wasn’t a term that would have been used at the time.

I also love that, in addition to supporting roles from the ever-lovable Monty and Percy, she teams up with an awesome set of other girls who have unique pursuits of their own. And like with the prior book, the characters’ desires and motivations are molded to examine issues of the time period while also telling an entertaining story, with colonialism being one that I really enjoyed being explored, through the growth of Johanna’s character. And Sim was fabulous in terms of being an awesome kick-ass pirate with some tender edges too.

This is a very good follow-up and a great book in its own right, and one I would recommend to fans of fun(ny), action-packed historical fiction.

The Love Letter is another great book by Rachel Hauck, about a time period I had long wanted to read about, and from a perspective that isn’t often talked about when the Revolutionary War is taught in schools. While I did note a few errors, chiefly when it came to editorial issues concerning persons from “across the pond” in England, it was the only flaw in what was otherwise a fun and entertaining book.

What I enjoyed most about the present day storyline was seeing how Chloe and Jesse navigated not only their personal woes, but issues with the film industry as well. As an outsider looking in, being a movie star or director looks so glamorous, but having to deal with all of those production issues along with all of that personal baggage sounds terrible. But I enjoyed living it through Chloe and Jesse’s eyes, and exploring how they let go of some of their difficulties in the past to finally pursue of a relationship with each other.

Inevitably, I did enjoy the past storyline involving Hamilton and Esther more, and the new perspective it brings by focusing on the doomed love between a Patriot and a Loyalist in the South. And while fate does conspire against them having their own happy ending, I love the way their story connects to the present storyline, so Chloe and Jesse can, in some way, be a fulfillment of the happy ending that Hamilton and Esther were meant to have.

This is a great read for those who love stories with dual timelines. It would also be worth reading for someone who wants to read about an aspect of the Revolutionary War that isn’t often discussed outside of more serious academic research.

Stephanie Laurens is one of those authors I’ve always wanted to read, but thanks to her large, interconnected backlist, and the increasing difficulty of getting older titles, I have largely held off, apart from reading one of her reprinted Traditional Regencies some time ago. But the premise of this series, with novellas in different time periods ranging from 1750 to 1940, following the descendants of Merlin and Nimue, seemed like a promising premise, especially given that it would also expose me to authors I had not read at all, or not read much of, as was the case with Laurens.

I enjoyed parts of the book more than others. I liked the romance and that, despite the shorter length of the book, it didn’t feel rushed. The story is a slow-burn, making the moment when Jacqueline and Richard get together feel worth it, especially considering the conflicts they have to face, including a suitor who is determined to do anything to force Jacqueline into marriage. I  also like that while there is a sense of the lore that will connect the women to their ancestress, it doesn’t feel too overbearing, so I don’t think those who prefer straight historicals to historicals with paranormal or fantasy elements will be too put off by this book.

However, I did find the prose a bit hard to take in at times. It might be due to the fact that Laurens’ writing style is not the sort I am used to, as I have heard others comment on that, but it just felt a little dense, and it didn’t allow me to feel as engaged as I would have liked with the characters. However, I do think this would be a great book for longtime fans of Laurens who are open to her trying something a little different, and engaging in the world she and the other authors have created. Having read and enjoyed some of the work by other authors involved, I will definitely be reading the others currently released, and looking forward to future installments. 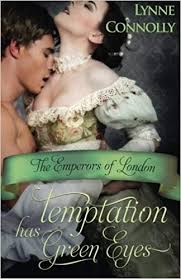 Lynne Connolly has once again proved herself to be an author one can count on for unique historicals rich in historical detail. I enjoyed the plot of this one, especially as it delves deeper into the feud between the Emperors and the Jacobite Dankworth family. Having only been aware of the basics of the conflict and various uprisings in the eighteenth century, it was wonderful to read a story that focused on the lingering animosity toward Jacobites themselves after the 1745 rebellion, I was excited reading a story rife with conspiracies, especially as it concerned the parentage of the heroine, Sophia.

Something I find refreshing is that, even with the number of marriage of convenience/forced to marry type stories, this is one of the few that explores the heroine’s carnal innocence with an initial uncomfortable consummation of the marriage between Sophia and Max. I love how that played into the trauma of her past experience with the man who tried to seduce her and got her into the predicament where she needed to be quickly married, and the difficulty they had as a couple working through that.

However, the resulting distance that follows this encounter means that there isn’t a lot on the real romance front. They do eventually come together and enjoy each other sexually, but there isn’t a lot of substance to it beyond that, and as a result, I didn’t know if they would have a bond that would survive the sort of revelations that were made about her background over the course of the book.

I had heard a lot of about this book, but I wasn’t sure if I wanted to try it, given that while I don’t see anything wrong with m/m romance, those books seem to dominate the market, particularly of adult romance, leaving the other identities, and especially women who identify as queer, unrepresented. But the recommendations for this book and finding myself with limited options for the LGBTQ historical square for the Ripped Bodice Bingo, led to me taking a chance on it, as well as Mackenzi Lee’s demonstration that she truly does care about representation across the board, as shown through her nonfiction book and her videos on EpicReads.

And I found myself blown away by this book. And a good part of it has to do with the characters. Monty is a character who is not always likable, given that he is often concerned with himself and what would make him happy, but he is a sympathetic character, and by the end of the book, I loved him, especially as he did evolve as a character. And despite the fact that I normally dislike the first person present tense narration, this is one of those books where it really worked for me.

Another strength this book has is the fact that in addition to openly discussing the difficulties faced by homosexual men who chose to pursue relationships with each other during the eighteenth century, there is also a focus on racial issues and the plight for people with disabilities, in this case epilepsy. Given the harsh realities for all of these populations throughout history, and how selectively romances seem to focus on these issues, it is refreshing to read a book that is unafraid to talk about them, while also being an entertaining adventure-romance story.