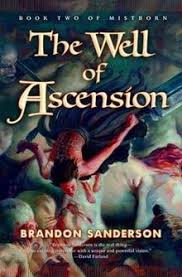 I went in to The Well of Ascension with similar expectations that I did to the first book, but aware from what I had heard that there was a shift in that this one was much slower, and that while for a lot of people it didn’t work for them, it has become the underrated favorite of the series among the BookTubers I watch. Thus, I did find myself having a lot of mixed feelings, as while I did like, and even love a lot of the book, I did feel like the pacing was more of a negative for me.

That said, I did still enjoy the book for the most part. I was curious to know where the story could go after the defeat of a Great Evil that is built up so much in the first book, and Sanderson delivers, offering twists to the narrative to make it feel fresh. And even if some of the reveals did feel a little obvious, I continue to appreciate that he tries to do something different than a lot of classic, “traditional” epic fantasy.

I enjoyed seeing Vin grow as a character as well. She grows a lot in this one, overcoming quite a few challenges and inner struggles. But I was even more won over by Elend. He was a character I wasn’t really sure about in book one, but he definitely grew on me in this one, especially with the focus on his role as a new king, and all the intrigue that comes with that new role. And while I’m not one hundred percent sold on the romance between them, I think the feelings were conveyed a bit better this time around, especially with both of them being a bit more fleshed out.

And while the cast did grow a bit, an as such it did feel a bit more harder to become invested in everyone as people, I continue to love Sazed as a secondary character. He is such a lovely, sweet character, and seeing him and Tindwyl was heartwarming.

In short, this book was enjoyable, in spite of any pacing issues. But there definitely seems to be a trend of people either loving this one and not being massively wowed by book one, or vice versa, and only a few who love both equally. That being said, I think it’s worth reading if you’ve read the first book, regardless of whether that one worked for you or not stylistically.

I was super hyped to finally read Mistborn: The Final Empire (sometimes just called Mistborn) following my enjoyment of Warbreaker. And it is definitely another great book from Brandon Sanderson. One of the strengths is the balance between the use of tropes and the subversion of them. There are some elements that led to the natural progression into the promotion of this series as YA, like the young, emotionally traumatized protagonist, but the overall premise of the series is radical in its approach to the idea that the “bad guy” defeated the hero.

I also like the way the overall structure of the book presents both a full story in and of itself and the first installment of a larger story with some plot threads to wrap up. While I have no issue with cliffhangers or one book’s story feeling merely like one piece of a puzzle, it’s nice to have a story where you end feeling both a sense of satisfaction and a longing for more, rather than frustration that it ended with so much unresolved and you can’t get to the next book fast enough (or in the case of currently running series, you have to wait at least another year for the next book).

Vin herself is an incredibly nuanced character, with the difficulties in her past. I like how it struck the balance between her being competent due to her upbringing, being somewhat slow to trust due to the trauma, and really coming to value the relationships she develops with the others she encounters throughout.

And all the other characters were complex and interesting as well, from the somewhat roguish hero, Kelsier to even the Lord Ruler whose identity presented a twist I did not see coming, and while it has been done before in some ways, provided a measure of amusement for me given the premise.

This was a fabulous book, albeit one where the opinions about it are definitely polarizing, especially when it comes to whether it will appeal to those who read more adult fantasy and aren’t as into the YA-leaning themes. My opinion is, if you’re new to fantasy and looking to ease yourself into the genre (or back in, in my case) this is a great starting point, but wouldn’t dissuade an avid fantasy fan from trying this one either, in spite of the criticisms.

I could not wait to read Warbreaker after seeing the way it was hyped by some of the BookTubers I watched as a good starting point for Sanderson’s Cosmere books. And this is one of those that did not disappoint.

One of the things Sanderson is great at is worldbuilding and establishing a great magic system within that world. And even though much of the story is contained into a smaller landscape geographically than other fantasy books I’ve read in the past, there is still a lot happening. And I loved the intricacies with the magic and how it played into the plot without it ever feeling like it just existed for the sake of plot convenience.

And while there are a bunch of characters and several points of view, I liked that they were more or less distinct from one another, and, even if the story isn’t super high action, I loved how the intrigue of their relationships and interactions really played into the plot.

I also loved the subtle romantic elements embedded into the story without overpowering the fact that it is meant to be a fantasy book. While I obviously often enjoy a more ostentatious passionate love story when I’m picking up a straight-up romance, it’s nice to see a relationship that slowly builds and develops in an organic way without having to be in-your-face about it.

That said, I would enthusiastically recommend this book as a starting point for Sanderson’s Cosmere books, given its fast pace and colorful characters, and smaller scope. But I would also recommend it to all fans of a good fantasy, especially since this in my opinion (and other people’s) an incredibly underrated book.

Skyward is a book that was recommended to my by a classmate last semester, and having since started watching BookTubers like Merphy Napier and Elliot Brooks who love Brandon Sanderson’s work, I wanted to start with something relatively easy and fun before challenging myself with his Cosmere books.

And I found this is an enjoyable read, and exceeded my expectations. While there isn’t a lot in the way of world building, given that the setting is still very much our world, albeit a futuristic version of it, I still found myself intrigued by their society and the intricacies of how it worked, with problems that are recognizable as being part of our own world, without taking away from the story’s value primarily to entertain.

Spensa is also a fabulously written character, who is determined to pursue this dream she has of being a pilot, in spite of the societal obstacles put in her way. And given that this is YA, I loved that it focused on her coming-of-age through this intense experience.

I also was oddly happy the book did not try to push a romance into the plot, especially since she has a male rival who she develops a friendship with over the course of the book. I loved that she developed these great relationships with the different characters, like Jorgen and Nedd that can work merely as good friends that have been through this intense experience.

All that being said, I would recommend this to fans of young adult sci-fi and fantasy who maybe want something a little different than what’s commonly being marketed to them. Although I’ve not read any of the Cosmere books, from combing through reviews and looking at opinions from other Sanderson fans, this suggests that it might mainly appeal to you if you read YA as well as adult books, given the generally “meh” opinions shared by these readers.